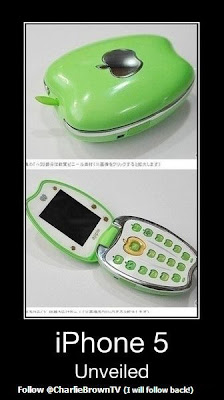 First off, I am a Blackberry user. Some say its boring. Maybe it is. But I love how it gets me connected to everything without hassle. Plus, I'm not a fan of touchscreen phones. Since I use my phone primarily for messaging (SMS, email, Blackberry Messenger, Twitter, Facebook), I prefer the tactile feel of a physical QWERTY keypad. And right now I can still very well say that the Blackberry is perfect for me.
However, whenever I see my friends using their iPhones, I must admit that I get (a little) jealous. Why? It's the number of things that they can do with their iPhone, primarily with all the applications available. Well, Android OS phones have more available applications, but I've always been an Apple fanboy. So if ever I'm getting a touchscreen phone, it will definitely be the iPhone.
For the past few months, everyone is anticipating the release of the new iPhone, and everyone has been expecting it to be a big jump from the iPhone 4 in terms of its physical design (looks), and its contents (guts). People have been expecting the upcoming iPhone as the iPhone 5. As with all Apple releases, there had been a lot of rumors circulating. There were rumors that the iPhone 5 will have spanking new design, a 4-inch screen and an edge-to-edge display so that it can rival with its competitors, like Samsung with its Galaxy S II, which has a bigger screen powered with Android OS. There was also a rumor that the iPhone 5 will feature a physical keyboard. While I welcomed the thought, I don't think the iPhone will ever have a physical keyboard, and given Apple's commitment to simplicity and seamless design, this will be out of the question. The most absurd rumor I read is that the iPhone 5 will have a holographic screen. Well I love the creativity, and the Star Wars-like imagination. But we're just not there yet folks. Seriously.
When I woke up this morning, everyone was talking about the release of the new iPhone. And to the surprise (or horror) of many, it is not the iPhone 5, but the iPhone 4S. Essentially, what this means is that the new iPhone 4S will retain the previous design of the iPhone 4, and the only change will be its upgraded innards. This is not the first time that Apple did this. They previously released the iPhone 3, then an iPhone 3G, and an Iphone 3GS. Many people I know are disappointed after hearing this news. Actually, if we take a look at the specs of the iPhone 4S, it's really not that bad. 8 megapixel camera capable of 1080p video, dual-core A5 chip (currently used by the iPad 2, making it 7 times faster than the iPhone 4), better battery life (8 hours of talktime instead of 7), among others. It also has a new feature called "Siri" - a voice-controlled virtual assistant that'll respond to natural language questions with relatively sophisticated semantic know-how. Whoa.
The disappointment comes mainly from people who were expecting a physical design makeover. So who is to blame for the absent iPhone 5? Not Apple. They never really said they were coming up with the iPhone 5. It is the online rumor mill that trussed the new iPhone with the number "5". Well if there is one thing that we learn from this is that rumors are just that - rumors. Nothing is certain until they are officially released. So don't keep your hopes up for that holographic screen. Not just yet. But personally speaking, if I'm buying an iPhone, I want a redesigned one. Not that the iPhone 4 needs one. Its just that I want something new in all respects - from the looks to the guts. So I guess, I 'll be sticking with my trusty Blackberry. For now.
Who knows, they might get ahead of Apple for that holographic screen. No. Not really.
Entry # 16
Mark Garrido
P.S. This will be my last ICT post *tear*. I had a blast. Thank you.
Posted by Mark Isaak S. Garrido at 4:07 PM