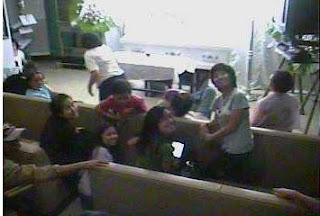 There has already been a previous blog entry about St. Peter Chapels’ E-Burol and E-Libing, posted by one of my classmates (Hi Felman!) but I’d still like to share my own first-hand experience with E-Burol during the wake of my Tito.

After my Tito was brought to St. Peter Chapels, I got a call from my parents – asking me to turn on the computer and log in to www.e-burol.com. They were excited. They said they can be viewed online. They gave me the name of the chapel of my Tito, a username, and a password. Indeed, after logging in, I was really able to see them together with the other visitors inside the chapel. When I went to the wake, my relatives were asking me to look at the camera (stationed like that of a security camera, up in the corner of the room, near the ceiling). They were asking me to wave at it. Apparently, my cousins in the States were currently logged in at the site and were viewing us online.

Though the concept of E-Burols may sound prima facie unappealing or strange (probably from the misconception of other people that the camera is focused right at the coffin!), it’s actually something very practical and beneficial. For one, it actually allows people to “be there.” In our case, the death of my Tito was so sudden that we really can’t expect that our relatives from the states will be able to book their flights and just leave their work at once to go here in the Philippines. Thus, even if they weren’t here physically, it’s a big thing for them to see how things are during the wake. Having actually experienced it and having benefited from it, I can say that E-burol adds up to the list of the things which I gratefully thank technology for.
Posted by Charisse B. Pena at 8:10 AM