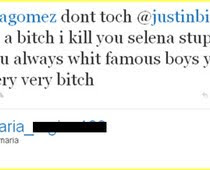 I came across an article entitled, “Could Justin Bieber Fans Face Jail for Selena Gomez Death Threats?*,” which discussed the legal implications of the twitter death threats being delivered by the ‘Beliebers’ to Selena Gomez, his rumoured new girlfriend. Though it is a tall order, the matter could be taken up by the FBI since the threats were delivered over the Internet, which means federal jurisdiction. If the bullying continues, or worsens, or grows more frequent or specific, Gomez could file a police report which would prompt an FBI investigation. The former prosecutor quoted in the article said that to sustain a conviction, the tweets should be accompanied with overt actions; there’s also a legal requirement that the suspect actually had ability or intent to carry out threats. You would need to prove not only harassment of texts but that Gomez was in sustained fear. In Reyes v. People,** the Philippine Supreme Court enumerated the elements of the crime of grave threats to be: (1) that the offender threatened another person with the infliction upon his person of a wrong; (2) that such wrong amounted to a crime; and (3) that the threat was not subject to a condition. They also noted that under the provision, the particular manner in which the threat is made not a qualifying ingredient of the offense. Therefore under Philippine law, the tweeters could also be convicted of a felony. But since the crime is mala in se, lack of intent is also a defense under this jurisdiction. It is a tall order indeed! But just because these girls go unscathed doesn’t mean that there shouldn’t be any reforms. They should learn that with the technology today, what they say (however mindlessly it might have been) have a way of reaching the persons involved and affecting them.